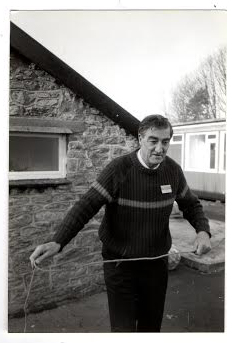 This article was originally published in Mendip Times.

Well…. It did arrive, the snow that is.  There have been some pretty inspiring deeds of heroism and  community spirit that came out from those couple of days of extreme weather. People who went out to help others in trouble , like our own Avon and Somerset Search and Rescue Team. There were individuals who helped get hospital staff to work and people checking on elderly neighbours…These situations tend to bring out the best in people. As always a common problem will bond people together and it’s so very good to see that.

I am re-visiting a series of articles I wrote several years back for publication in the Mendip Society Newsletter. I was encouraged at the time by Peter Gearing, then the Societies Editor, to relate my time as the ‘Mendip Warden’. Well here  is the first in the series , re-told and re-edited to be more relevant to today’s world. “This, (to paraphrase a very famous and long running BBC radio programme) is an every day story of country folk”, well at least within the Mendip Hills anyway and is a look back at the years of the Mendip Wardens. Things that went well and things that maybe didn’t go so well, are all included in this series of articles that I hope you will like. Amongst the sentences and paragraphs to follow, will be personal recollections, thoughts and views. After all, an individual’s view on any subject depends on the position they view it from. There are those who have been on Mendip a lot longer than I have and those whose knowledge is infinitely greater than mine. However, this is not intended to be a definitive history of the Mendip Hills, but rather the development of an institution that evolved and included so many people. This is the story of the ‘Mendip Wardens’ and what it was like in those early years of the Area of Outstanding Natural Beauty, (AONB). Here then was how it all began!

I don’t intend to go into a history lesson about the establishment of AONB. Simply to start by saying the Mendip Hills AONB was created in 1972 by the Countryside Commission. With amazing speed for a Government establishment, (as Tom Elkin the original Warden once said) the AONB was set up and made operational by 1983, with a Warden and a steering group.

The early written statement was the first management plan, laying out the work needed to enhance and protect this very special part of rural England. Tom Elkin , then Head of  Charterhouse Centre, helped to establish the framework of the Warden’s role, and later implemented it as the first Warden. His job would not have been easy , even though he had worked on the “Hill” since the early 1960s. He had to pull together the sinews of Mendip, the landowners, the farmers, the Parish Councils and those groups, Trusts and Societies that had such an important role to play in any future development. To ignore any of these would have been to plan for failure.

The early work Tom carried out, laid the foundations which I was later able to build upon and enhance in my own style. He concentrated on building relationships and establishing contacts, a job that could be described today as being ‘client liasion’. He had married a local farmer’s daughter and was a man of Mendip, even though he spoke with a northern accent. Tom had a lot to overcome in his early days, often being viewed as a “County Hall spy”. He worked to gain the confidence of those who’s cooperation was essential to the success of the newly fledged AONB. He was also aware that he needed to tread carefully with those who had been around for a while and who had been looking after the interests of Mendip.

In those early days the Warden Service was administered by Avon County Council who, I have to say, did an excellent job for the AONB right up to the day they were devolved into Unitary Authorities. Many a harsh word has been spoken of the Avon administration, but I must speak as I find, for both Tom and I had nothing but praise for the way in which we were looked after under them.

The AONB logo of a cow and a wall with a sheep in front, was originally the Warden Service logo.  This was a brain child of the two countryside departments of Somerset and Avon. I think it has stood the test of time… It’s still there. I have always felt it told all you needed to know about Mendip top, it’s a farming area with dry stone walls. There was another photo used on many leaflets produced in the early days, a windblown tree and  broken wall. This so epitomised the wind swept open plateau. The tree has now gone but the broken stump remains along side the wall, high above Cheddar and Shipham, almost in defiance of the natural elements and passage of time that led to it’s passing.

Tom was in no rush to create his Volunteers Rangers. He had spent a long time looking at the various organisations that existed. He chose those he liked best and felt worked well to found his organisation upon. I felt he chose well, and when I took over from him, changed very little of what was in my opinion, a very good, happy and dedicated group of volunteers. A testimony to that dedication was evident, when at the 20th anniversary lunch arranged by the Rangers in 2007, seven of the original members were present and at the annual get together’s numbers of those who attended was always in the high 60s.

The post of Assistant Countryside Warden Mendip Hills AONB was created in the late 1980s, and with that post came Fran Griffiths, Tom’s first assistant. About that time yours truly came onto the  scene as a Volunteer Ranger. I signed up in 1989, having just left the Territorial Army after 18 years and was looking for some organisation that could make use of me, this is when I bumped into Tom at an exhibition at the Bishops Palace in Wells. When Fran left, I applied for the position of Assistant Warden, which led to my successful appointed in September 1990, I was then 38. This was a dream come true, I could not believe my luck. It was the start of an involvement with Mendip that still remains special today. Once Mendip gets a hold of you there is no going back and nothing or anywhere else will ever match up to it again!

I’m going to hold it there for the moment, after all too much excitement is not good! Next time, more tales as a ‘youngish’ Warden starts to get to grips with life on Mendip. This months photo is of the man who started it all moving, the late Tom Elkin MBE… By the way, how long is a piece of string?