Posted on September 25, 2017 by westcountryman 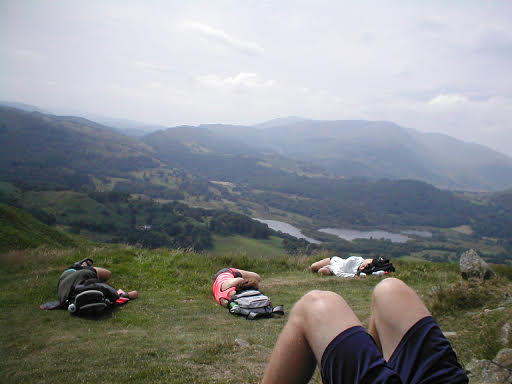 My fears of a scorching hot summer, with out of control wild fires now seems a little far fetched. On the continent however the story seems to have been very much different, with high temperatures and dry conditions causing catastrophic fires… Maybe its just as well its raining here! There have been warm and sunny periods that make me think there is some hope after all for a ‘summer’. At the time of writing this months column however, the jet stream seems to well below us , dragging in all that wetter cooler air.. Is this August or November?

It was a great July for me, with the annual visit by students from the University of Georgia,(UGA) in the States. I was always told that time spent on reconnaissance is time well spent, that came true again with the preparations I made last month. Here in the UK for three weeks, they start with London and Cambridge before experiencing the West Country. This year it was a two night stop at Fernhill Farm, the home of Andy Wear and Jen Hunter and their site of sustainable enterprise. The students experienced at first hand Andy’s enthusiasm for his shepherding and way of life on Mendip. Thanks to Garth Clark, the Managing Director of Holt farms Ltd ,(Yeo Valley’s farms) they learnt about the sustainability of organics and how it suited the style of farming that Yeo Valley have chosen to follow. The Area of Outstanding Natural Beauty,(AONB) was not left out either, as Manager Jim Hardcastle explained the way in which care, tact and consideration was needed to maintain the balance between the landscape, visitors and the rural economy.

It must be remembered that for someone who does not hold a passport, any movement outside the West Country is a big adventure! Having thrown away my map that shows only the ‘known world’ of Somerset, with “Here be Dragons” written on the blank space around it, I now find that Mendip has a lot of links with other parts of the UK. I have already mentioned the similarity in Geology with the Peak District and the lead mining that took place in both areas. Another family connection is there for me; Bakewell was where my late Uncle Dennis lodged when he first moved up to the Peak District to work on a farm high on the Snake Pass. When I walked into the local pub at Monsal Head near Bakewell, where I had been able to get some local knowledge on my last visit, I had only to say a few words before being greeted with a sideways look and the comment,” You were in here a few weeks back weren’t you”… Heck! They know who I am and probably where I live!!

August will start the return to Autumn for Mendip. Already I notice the later daylight in the mornings and the closing in of the evenings. Mendip always goes into Autumn earlier and arrives in Spring later that the rest of the ‘world’. Higher altitude and a tendency to pick up more rain that most places East of Exmoor, this limestone plateau has a climate all of its own. Time now to check out your walking kit and make sure it’s waterproof and fit for purpose. You may well have had ample opportunity to do that already! I try to waterproof my coat each year and with modern proofing its so easy to do in the washing machine. As always, the ‘Devil’ is in the detail , so its the contents of my rucksack that also comes under scrutiny. Things to check are: Mat to sit on; First Aid kit; high- vis waistcoat ; small pair of binoculars for picking out that elusive stile that hides in the hedgerow across the field and finally the means of keeping body, soul and moral together.. Something to carry food in.

My hot drink flask has had a bit of a ‘kicking’ but is still doing the job it was designed to do, keeping my tea hot. No longer do I have to throw away my flask after I have dropped it and turned it into a mix of shattered glass and tea that sounds like an iced cocktail when it’s shaken . The sandwich container is no longer a tin box with the word ‘Sandwiches’ stamped in relief on the lid, just in case I had forgotten what was inside. As a child, I remember the ‘day out’ kit was stored in the larder at home and the sandwich box was just as described. It was in those classic 1950’s colours of cream and light green, with a wire bolt closure on the lid. The hot drink flask was a real ‘Thermos’ coloured cream with two red bands around the base. No screw top closure, just a cork with a Bakelite top to keep the contents hot. To have broken it would be to have committed the greatest of errors. It was carried well wrapped up and with more care than the transit of Nitro- Glycerine. They would both be worth some money now but the going of them is lost in the mist of my memory. This just goes to reinforce my belief that nothing should be thrown away and all that stuff in my shed is just a resource waiting to be relocated!
As for the students from UGA, my week with them was far too short!! We shared the sights of the Peak District, the story of the Bronte’s in the Pennines and the wonders of the Lake District. For them it was a time they will remember forever, a time in which they forged new friendships. They learnt it was alright to take time out and look at what was around them. They loved Mendip together with everything else they saw and experienced in our Country. My photo this time shows some of them exhausted and ‘crashed out’ on the summit of Loughrigg Fell in the Lakes. Totally immersed in the landscape they have wandered, not lonely but as a crowd! Please note that those are not my knees!!