This article was originally published in the June edition of the Mendip Times. 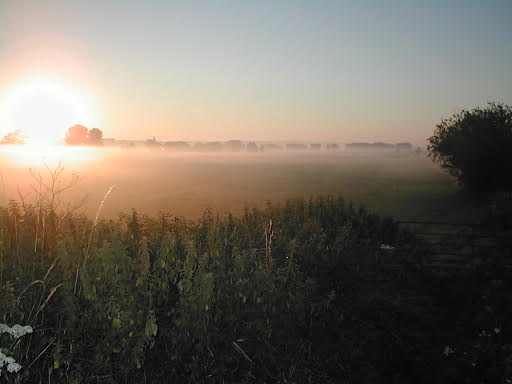 We are almost half way through the year! Just like the bath water disappearing down the plug hole, this year seems to be going rather quickly. My hopes of warm and sunny days are to a certain extent being realised. The evenings are a delight and the Blackbird sings his heart out in my garden at the end of the day. There is however some concern as to just how long this dry weather will continue, and what the consequences of it will be.

The ground is cracked and the grass has not been growing as would be expected at this time of year. Well that’s fine for me, I don’t have a ‘lawn’ as such, just a couple of patches of grass that I like to keep cut and tidy. What the knock on for a second cut of silage is yet to be seen. I’m told that this has been the driest winter for years, which is some cases has had its advantages, such a been able to get onto the land, but temperatures have stayed low for quite a long time, slowing down the growth.

As I was once told by a farmer in Baltonsborough near Glastonbury, “ We can stick a dry time after the Bath and West show, but not before”… How right he was. The Spring period needs water to get everything going, and the warm April showers have always provided that. We all want it to rain at night whilst we are asleep and don’t need to go out. Then we want the sun to shine and warm our long summer days in this green and pleasant land. Not too much to ask for.. Is it? Many will remember 1976, which after a dry Spring produced a drought that didn’t break until September. I recall desperate farmers trying to buy hay to feed to their cattle where no grass existed. I never pay too much attention to the newspaper’s and their forecasts of scorching summers and freezing winters, just hoping they’ve got it wrong again this time!

‘The Oak before the Ash its going to a splash; Ash before the Oak, its going to be a soak’. Often heard, but rarely reliable, this old rhyme is one of many based on countryside folk lore. Such sayings were brought about by observation at a time when scientific data was somewhat lacking. Having done a little research on this subject, I find that the number of times the Ash has come out before the Oak within the past 50 years have been very few. It would appear the Oak will come into leaf in a warmer Spring quicker than the Ash. The result could be as much as 6 days earlier per 1 degree C rise in temperature. As we seem to be in a situation of rising temperatures through climate change, it could knock this old saying right out.

Mendip can withstand a dry time better than the levels. The underling limestone on the Hill is able to hold water, that is why Mendip is one of the largest limestone aquifers in the South of England. The late Dr ‘Willy’ Stanton estimated that around 72 million gallons of water would come out of the Mendip Hills on a daily basis, (that’s around 324 million litres). Willy didn’t just pluck this figure out of the air. He was a very well respected geologist and hydrologist who bases his estimation on rain fall and area. I suspect that figure may be a little lower this year. Stone close to the surface will also hold the moisture plants need, especially grass which is why the Mendip farmer comes up ‘trumps’ is a dry time!

Warm dry weather also brings the risk of fire on Mendip. Thankfully there hasn’t been anything as bad as the 1977 fire on Black Down, where virtually every fire pump in what was then the county of Avon was deployed to tackle it. Certainly the removal of bracken will have helped reduce the fire risk. In the past Black Down was often set alight in the belief it was controlling the bracken. The outcome was quite the reverse however , as a potash rich residue produced by the burnt bracken fed the underground rhizome system and strengthened the growth. Today wild fires can still cause havoc. The Waldergrave pool area near Priddy seems to go up with monotonous regularity. Such fires there are rarely caused by a ‘natural’ ignition but more by human carelessness.

At this time of the year I like to point out the problems of ticks.. This year is no different, in fact it may be worse after the dry and relatively mild winter. Many more of these unsavoury little fellows will have over wintered and be out there waiting for the next warm blooded creature to pass by. Looking somewhat like a spider they will crawl around on the host until they find a suitable spot to bury their head below the skin and feed off the blood. Once they have gorged themselves, and swollen up to several times their normal size, they detach themselves and fall to the ground. Removing them from you or your dog needs care and a special tick removing tool that looks somewhat like a claw hammer can be purchased for this purpose. Don’t forget to carry out your body checks when in the shower at the end of the day, as well as covering up when you are walking through areas of bracken and rough grass. Frequent checks for these unwanted hitch hikers will reduce the risk of being bitten. Don’t be afraid… Be aware.

Finally a nice bit about summer! Congratulations to all those who won county nominations for Somerset, Dorset , Wiltshire and Bristol in this years Environmental Youth Awards, sponsored by HSBC Bank and the Royal Bath and West of England Society. Those presentations will be made at the Royal Bath and West Show on Friday 2 June by TV personality Valerie Singleton. You will also be pleased to hear we have a Mendip winner for the Bristol nomination this year. Mya-Rose Craig comes from Compton Martin and is a pupil at Chew Valley School, not to mention being a Young Ranger with the AONB . Her innovative work to introduce Black and Asian minority groups from Bristol into the environment has been quite inspirational. Why not read her blog at http://birdgirluk.blogspot.co.uk/

Don’t forget to come and see us at the Show. The Environmental Youth Awards are under the judges commentary box on the main ring.

This month’s picture is pure Summer Magic! Sunrise on the Levels.