Posted on October 4, 2014 by westcountryman

In his October column, Les talks about the onset of Autumn and the various harvest celebrations that characterise this time of year. He also talks about old engines and has an update on the old Victoria stationary engine he wrote about in September.

Les also pays fond tribute to his Uncle Geoff who sadly passed away in August. Geoff Tavener was a man destined to work on the land and Les spent many happy times with him as a boy. His first driving experience was on his Uncle Geoff’s Fordson Standard tractor – his uncle would occasionally correct Les’ steering with the end of a pitchfork!

Les ends with the advice that we should “we should all appreciate those who are around us, for they will not be with us forever!”

To read the column, click on the image below to go to the Mendip Times website. Best way is to view the magazine on PDF – go to the option ‘the magazine’ on their menu and then click to download the latest copy of the Mendip Times. Les’ column is on page 52 of the October edition: 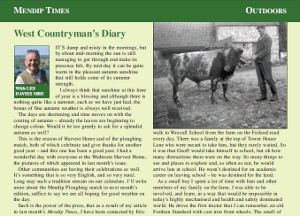 Catch up with earlier columns here.