Posted on April 3, 2017 by westcountryman 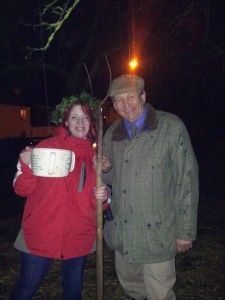 My daughter Lizzie and I back in 2013 at the Glastonbury Rural Life Museum, when she was made Wassail Queen!

Life will often come up with surprises, sometimes nice, sometimes not so nice. My life is no exception and recently I picked up a ‘challenge’ that was just too good to miss.

Having done an interview for BBC Radio Bristol about the ceremony of ‘Wassailing’ the apple trees, I received a call from the researcher for the Jeremy Vine show on BBC Radio 2. Would I help them with a live Wassail on the show was the question. Well… I could change things around a bit and be by the phone at the required time to do the interview. Oh no! They wanted me to go to London and do the thing live on air.

For those not familiar with this ancient ceremony, let me explain a little further. Back in the mist of time during the dark ages nothing was left to chance when it came to ensuring good crops, and so around old twelfth night ,(now January 17) the Wassail ceremony would be carried out to drive away the bad influences within the orchard and encourage those good things that would be helpful. In short this ceremony has its beginning as a pagan insurance policy.‘Wassail’ is translated from Anglo-Saxon and means ‘Health be unto you’. So it is that the trees are awaken from their long winter sleep and encouraged to grow with song and revelry. The tradition still lives on in this part of the world, the county of Somerset within the ancient Kingdom of the West Saxons, Wessex.

Back in London meanwhile Tom Bigwood the show researcher is busy collecting all the things I am going to need; a small tree or bush to ‘Wassail’; things with which to make a lot of noise and drive away the negative stuff; some cider to pour around the tree ; toast as an offering to the good and helpful things and a crown for the Wassail King or Queen, not to mention some apple cake  with  bean in it to choose said King/Queen. This ended up being an apple and blackcurrant sponge with a Brazil nut hidden in one piece. As a West Country boy himself, Tom set to the task with enthusiasm. I meanwhile had to get myself to London, where a car would take me to the studio.

For those of you who are hardened commuters this would be just a part of everyday life… For me however this was a journey into the unknown , and to the very edge of my known world! So it was I arrived at Castle Cary Station in Somerset to catch the 9.40 to Paddington. First however sustenance was needed, and provided from the sandwich van run by a very helpful and friendly man. Onto London, off at Paddington and onto the studio , where I met the very capable Tom and was introduced to the rest of the crew, including a ‘rented’ group of wassailers. Amol Rajan was standing for Jeremy Vine , and the Ceremony duly carried out with Cider writer Pete Brown in attendance, All in all despite my singing, everyone enjoyed it and the whole thing must be the biggest Wassail ever, with all those who listened that day.

Back on the train and away  to the land of ‘Scrumpy and Western’ once more. As the urban environment changed to more open countryside, I could again relax a little and let things sink in. Journey’s end was as it began, Castle Cary Station, where I greeted the Sandwich van man and thanked him for his mornings provision. I received in return an inquisitive look and the question,  “Was that you on the radio this afternoon?” “Yes” I replied somewhat shocked at the recognition. “Well” he came back “I heard your voice and thought I’ve heard that before, and when they said He’s just got off the 9.40 from Castle Cary, I knew it was you!”