Posted on December 20, 2016 by westcountryman 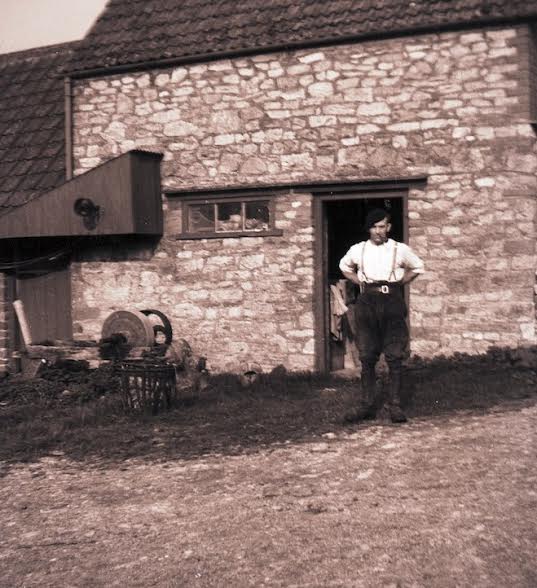 I cannot believe it is almost Christmas! So what will the weather be like this year? Cold and frosty with snow on the ground or wet and misty with rain in the air. What is a traditional Christmas after all? Has our view of Christmas been idealised over the years by Christmas cards with snowy scenes, or by silver screen classics such as ‘White Christmas’  with Bing Crosby. All warm woolly sweaters and log fires while the snow settles outside.

We are all visited by the ‘Ghost of Christmas Past’ in one way or another at this time of year. Memories of family gatherings that cannot be re visited, memories of happy times and sometimes sad, but above all there is the feeling of another year coming to a close. For me, within this mist of memories lie a few icons of the Christmas past. Things that still remain sharp in the mind even though the passage of the years has dulled the short term memory, it seems to enhance the longer term.

The simple Christmas dinner that was taken around the kitchen table. It would be chicken, thyme stuffing, roast potatoes and sprouts, all topped off with a rich brown gravy that could be cut into slices when it went cold! The fire would be lit in the sitting room with hot coals brought in on a shovel from the kitchen Rayburn and the afternoon spent watching a TV Christmas Special. Tea would be one of the Christmas pudding my Grandmother had made the year before, carefully stored away and now re-heated and served with thick Bird’s custard with extra milk and sugar. So would end another Christmas Day with all its traditional ‘punctuations’ that I remember

One item of Christmas tradition was the ‘Giles’ book. A collection of cartoons from the Express newspaper drawn by Carl Giles, who satirised events throughout the year through the antics and exploits of a very ordinary extended family that most of us could relate to in one way or another. Many of you will I’m sure remember these wonderful books. For those of you who were never fortunate enough to receive the collection of Giles cartoons for Christmas, let me explain how this iconic, dysfunctional extended family managed to survive the festive season, or should I say how the festive season managed to survive them.

Christmas in Giles land was always snowy. Outside, the long garden complete with coal house and shed is covered in snow.  Inside the house, the living room has a large open fire and a Christmas tree festooned with lights in one corner. The ceiling is hung with paper chains and lanterns such as I can remember from my childhood days, and a glimpse of the kitchen was always available where mother, wreathed in steam, would be cooking a Christmas meal helped by her two grown-up daughters. Dad is in front of the fire, feet propped up and fast asleep whilst grandma, complete with a huge padlock on her hand bag reads the racing times and drinks stout. The children meanwhile, play on the floor with a plethora of guns and knives that would give any trading standards officer a nightmare. As for the family pets, they also add to the chaos by chasing one another and shredding various items of household soft furnishings. Even the poor old Christmas turkey gets in on the act, and on one occasion is reprieved by a family vote whilst being hugged defensively by one of the girls. Christmas dinner will be several large tins of corned beef that day.

It was not only at Christmas that Giles excelled in his pictorial portrayal of everyday life His view of the countryside, which no doubt came to him first hand as a pig farmer, gave an attention to detail that did him credit. His countryside was classic, with sunken lanes and woods dominated by oaks and elm. Wooden gates hung from their broken hinges and in the local pub men sat on benches, still wearing their coats and hats, drinking pots of foaming beer. The landlord would hang menacingly across the bar and on the walls a few notices extolled the joys of a local dominoes match or village jumble sale. Coats were held together with string, and the hats a mix of flat caps and trilbies. Nice to know that I’m still in fashion!

His portraits of countryside characters have always been priceless, set in a post war era of rural fashion. This meant flat cap, ex-Army great coat, nailed boots or wellingtons with the tops turned down and leather jerkins. His farm workers where solid and strong with flat caps worn at the ‘jaunty’ angle. Wide leather belts would fastened their trousers with a large metal buckle at the side. Farm machinery was draw in minute detail and quite often in a ‘broken down’ situation with some poor sole covered in oil trying to repair it in the snow.

The countryside poacher received the Giles treatment as well. Always with a flat cap and enormous over coat, protruding from which would be a mass of pheasant tail feathers and still more in his bag. Of slight, wiry build this rural rogue was a lovable rouge, and nothing like the poachers I had dealings with when I was working as the Warden on Mendip! He went about his business on a bicycle, knocking of the birds that belonged to the local squires shoot. His nemesis was the village policeman, a rotund individual with his helmet worn towards the back of his head and with bicycle clips around his ankles This character portrayed a time when rural policing was of a lower intensity.

The Giles book was a treasure that you could take down from the book shelf time and time again, each time finding something new in the drawings. Some immanent disaster that was about to befall an unsuspecting victim, or a whole different story that was being played out in the background. This was the magic of Giles and of the institution he created with his Christmas cartoon books, so if you see on in the charity shop..grab it! It will certainly give you hours of entertainment.

Finally I have attached a picture of my very own countryside character, my Grandfather Charlie Tavener. Please note the belt buckle, breeches and gaiters together with the solid stance and a firm grip of the pipe.

Merry Christmas everyone. I hope that it will be everything you could wish for!