Posted on December 13, 2016 by westcountryman 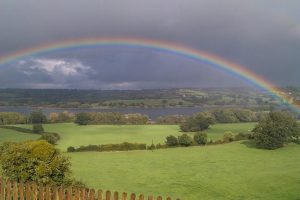 I missed the swallows leaving this year. It feels almost like not saying goodbye to a friend before they leave to go home. Perhaps as in most cases, my mind was busy elsewhere and I simply forgot. They always used to gather on the electricity wire that ran across the yard in Hales Farm. I could not miss them then because of the excited twitter they always made during that wait to gather everyone together. The youngsters from that year must have known that something big was about to happen, but maybe they didn’t grasp the enormity of the task they faced. What of the older birds who had made this journey before? Would they enter it again with trepidation or eager anticipation. In truth I cannot tell, nor I doubt could anyone else, but the fact is they do it every year, that journey of thousands of miles to a warmer climate and then they will come back again next year to the sites they have nested in for generations. Some will not return, some will not survive the journey and some may be too weak to even try. When the swallows leave its a sad day!

There are some brighter moments with the onset of autumn. The hedgerow is full of colour and the trees are starting to change into their autumn wardrobe as they pull back every bit of nutrient from what will soon be the redundant appendage of a leaf. Its time for autumn walks and Sunday afternoons in front of the fire. Time to reflect and time to plan. I quite enjoy this time of year as it leads me gently into winter, which I know is coming and which I know will be cold, wet and dark. A good Autumn is the buffer between the long summer day and the short darker days of winter. There is however a lot to be done before the clocks change at the end of October.

Life in the countryside is busy. Its a race against the daylight clock to gather as much in the way of winter stores as you can. At the time of writing this much of the maize cut for silage has been brought in during dry weather. What a bonus when the crop can be harvested without too much damage to the ground and too much mud being brought out onto the roads. The apple crop is coming into the apple mills by the trailer load for cider making and I have lifted the last of the main crop potatoes in the garden. I missed out,(again) on the elderberries for wine making this year. Just like the swallows, by the time I had thought about it they were gone.

The wildlife is also busy in the race against the daylight clock. Food stores to be prepared, winter accommodation to be sorted out and its time to put on a little ‘hibernation’ weight in preparation for the leaner times ahead. As the poem by W.H Davies so graphically puts it; “What time to see in woods we pass where squirrels hide their nuts in grass”. Having watched a squirrel do just that it amazes me how they can ever find them again, and in truth most of them aren’t found. This however does not stop the frenzied activity, as said squirrel rushes back and forth digging small holes and burying the nuts. The whole job is finished of by patting the soil with the front feet in a very determined and precise manner.

As well as being a season of harvest, autumn is a time of field preparation for winter sown crops. With that comes the ploughing match. The North Somerset Agricultural Society were blessed with good weather this year as was the Mendip Ploughing Society. This, the 158th year and the 147th match of the Mendip Ploughing Society did not start with great promise! Monday before the match is always the mark out day when everyone turns up to help with the preparation. This year it also decided to rain and turn the whole site onto a slippery mess. Tuesday, however, was better and by the time the day of the match came on Wednesday things were drying up nicely. The marquee was up and the army of ladies worked flat out all day supplying sandwiches to the 96 ploughmen on the field together with the hedge layers and drystone wallers. That’s with out lunch for all the stewards, judges and members of the public.

You have to have a connection with the land to understand just why so many people turn up in a field to watch ploughs at work, examine roots and fodder crops as well as casting a critical eye over the hedge laying and drystone walling. Many more non- farming people are discovering this countryside day out that has a special atmosphere all of its own. There is a desire amongst many people to return to simple pleasures, and the kind comments that I received from many there that day tend to back this up. Lots more pictures of the day in this months issue of Mendip Times for those who missed the match this year and for those who made it.

There has been some comment lately in the news about many people not taking time to relax. Its true! Life is full of rush and tear, a frantic tread mill of meetings, appointments and engagements that swallow time. Time therefore to quote a little more of W.H Davies:

What life is this if full of care

We have no time to stand and stare

No time to stand beneath the boughs

And stare as long as sheep and cows.

Its not the first time you will have seen me quote lines from this poem and I doubt it will be the last.

My picture this month is of a rainbow over the Yeo Valley. I’ve taken them before but this one was a joy to behold. Such a sight lifts the spirit and gladdens the heart. To use a line from a 1960’s song; “The sun always shines down in my rainbow valley”. I can’t remember who it was but let me know if you do.

This column was originally published in the November issue of the Mendip Times.