Posted on November 3, 2016 by westcountryman

This column was originally printed in the October 2016 issue of the Mendip Times. 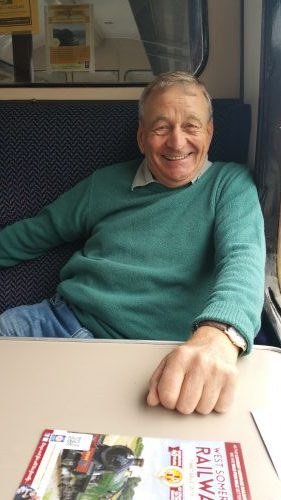 October, and the nights begin to close in. Where did summer go, or was I at lunch when it happened? When the sun did shine it was glorious and many winter evenings will be spent looking back on those sun filled days. I have found that my memory is kind to me and blots out the bad bits to leave me with the good stuff.

I hope that you all managed to get at least a week away from work. Back in my childhood days there was no holiday as such. Days out were the holiday for a lot of people and when I look back now, I realise what an expedition the day out really was. For me it wasn’t a problem, I was just swept along by the tide of organisation that was the annual day trip to Weston-super- Mare.

Organising this trip would need careful planning and preparation. These days I will often get up and go if the weather is right and I’m in the right mood. Thats because I don’t have to think about transport, the VW camper sits on the tarmac ready to move at a moments notice. If its a packed lunch that wont take long, or something can be bought on the way. I have chairs, a table and all the other paraphernalia needed already stowed on board. Back then it wasn’t so simple, it was a major undertaking in both the deployment and recovery stage of a day out.

The date for our Weston trip needed to be set when there seemed to be a spell of settled weather, preferably sunny. Food would need to be thought about, although in the latter years of this annual expedition, dinner at a department store was all part of the day.  My Grandfather would normally be unable to come with us because of some job or another that required his attention on the farm, a situation which I think suited him well. He would however be expected to provide his own dinner, which always seemed to involve frying onions as I remember. Exactly what he had with these onions however, I cannot recall. Those remaining would be my Grand Mother, my Mother, my youngest Uncle and me. My Uncle Leon would come in my early days as he was,(and still is) 8 years older than me.

Once breakfast was over, out came the dreaded travel sickness pill, crushed up and administered in a liberal amount of home made jam. After all I would be on the bus and then the train, with the risk assessment showing severe consequences from motion sickness. Once suitably dressed for the occasion, the trek began.

Everything needed had to be carried in shopping bags, so essential kit such as bucket and spade would often be purchased at the destination and be hauled home again at the end. The walk from Hales Farm to the bus stop at Stone Edge Batch is well over a mile. At the bus stop we would wait for a Bristol Omnibus Company green double decker bus to take us to the Triangle Clock in Clevedon. This it did, accompanied by the crash of gears and the constant stop-go of picking up and putting down along the way. From there it was a short walk to what was then Clevedon Station and is now a shopping complex. Tickets duly purchased the wait would begin in a somewhat dark and cold waiting room that contained heavy wooden furniture and a clock that ‘clunked’ rather than ‘ticked’.

The little saddle tank locomotive would eventual arrive pulling a few carriages and we would start the journey to Yatton Station. It rocked, it rolled, it clattered and chugged along a route that is now long gone. I can still recognise bits of the old line today, and remember the insides of the carriages, somewhat like the Harry Potter Hogwarts Express. Yatton Station was where the main line train would take us to Weston and the sea front!

This is where things became very exciting! Dinner would be mixed grill in the café of a department store, a meal that I would never have been able to have ordinarily. Next the purchase of the bucket and spade and then there was the Grand Pier to explore. It was a long walk to the end, where the penny arcade held a host of machines that played out gruesome scenes for the eager voyeur, or the crane in a glass case would grab a gift, only to drop the thing before it could be delivered down the chute. Then there was the ‘crack’ of rifle fire from the shooting gallery, where a pottery figurine or large cuddly toy could be won. For a small boy however this was one amusement too far, the shooting gallery would have to wait for later years.

Now down to the beach where deck chairs would be hired and a jug of tea purchased from a small wooden shed on the sands. As always the tea would get sand in it despite the best efforts to keep it out. The rest of the day would be sandcastles and tea. All too soon it would be time to pack up and start the weary journey home. There was never as much excitement in this part of the day, it was long and tiring.

Back in Clevedon there always seemed to be a problem getting on the bus at the Triangle. This meant a walk to Six Ways, where the bus started its journey and there was a much better chance of getting a seat. After the bus dropped us off at Stone Edge Batch, it was the walk back home and the end of another annual day out to Weston. Finally, tired and weary I would tumble into bed at the end of this longest of long childhood summer days.

Gosh how our expectations of life have changed. Now its a foreign holiday for a couple of weeks for some, and a week in Pembroke for me. The basics of the day out still remain though, excitement on the way out and weariness on the way back.

This months picture is a much,much older me off on a day out to Minehead. Re-living the past, this time along the West Somerset Railway with daughter Lizzie, who took the picture. The ‘day out’ still has its magic.